Thoughts on Food, Words from the Heart, 'The Little Winged Ones'…. 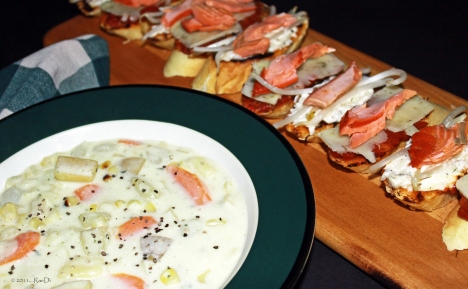 This is a post I wrote several months ago and forgot about, hope you enjoy, the chowder was delicious as was the Kippered Salmon Bruschetta.

It has been a couple of days of cool wet weather; the summer season has come to an abrupt ending here in the Northwest.   Drizzle with rain off and off for the last few days have called for soup chowder for dinner.

We have plenty of Yukon potatoes and one ear of corn that can be put to good use, and too  will add a lone carrot  found in the crisper.  I decided to make a thick chowder for dinner.  Would grill the corn… that would add another level of flavor to the mix.

Diced up the potatoes and put all but about a cup into the pan.  Cover with water and add a pinch of salt.  Then take the left over cup of potatoes and put them in another saucepan and add one carrot that has been sliced.  A few minutes into the boil add about one half cup of frozen pearl onions.

Spray some olive oil on the corn and put it on the grill to cook.  Once it is showing grill marks rotate and grill until all sides done.  Then cut the corn from the cob and add it when  adding the half and half to the chowder.

When the first pot of potatoes are finished drain almost all the liquids off and mash them up good then add the mix of potatoes, carrots and onions with some of the liquid from that pot.  Then add the half and half to cover plus about an inch.  Now put the readied grilled corn into the mix.  Sprinkle the chowder with a little dill, fresh ground pepper, a little garlic powder and parsley.  Let it simmer on low for just a few minutes and it is done.

It was a very easy and quick chowder that is thickened with its own potatoes.  I do two separate batches of potatoes so will know just how many potatoes are mashed and also I do not accidentally mash any of the carrots and onions this way.

I normally would add some bacon pieces or pancetta or even a few pieces of ham, but tonight we would be having some Kippered Salmon Bruschetta as the side.

Buzz, one of T friends that is a part of the fishing season has been giving us some wonderful veggies from his garden.  Lots of wonderful home-grown tomatoes, there is cherry/plum of red and yellow and so many varieties of tomatoes in all sizes and shapes.   I actually did some pickled cherry tomatoes with one batch he gave us, one of these days I will get it posted.

Take about a dozen tomatoes and cut them up into nice size pieces and put them into a saucepan and add just a bit of water, not much, the tomatoes will have enough of their own juices after just a little bit of time.  Add four sliced cloves of garlic and just a little sea salt and pepper for now.  Once I had them reduced down (this took several hours) to very little juice (it is very thick and has lots of nice chunks of tomatoes) I added about a teaspoon of Italian seasoning and a little dill to the pot.  Ladle out about two tablespoons of the thick juice into a little dish and add about the same in olive oil to the juice.   This I would use to brush on the baguette slices before they are put on the grill.  It was already hot from grilling the corn.   Oil the grill a little to keep the baguettes slices from sticking.  This took not much more than a minute to have them all grilled.

Shred some Havarti Dill Cheese and mix with some sour cream… add just a pinch of dill and smoked paprika… you only want enough sour cream to be able to mix.  Take the cheese slicer and slice a few thin slices of the Havarti Dill Cheese to use on the bruschetta too.  On some of the pieces of grilled baguettes put the tomatoes mix and then add sliced Havarti Dill cheese and top with Kippered Salmon.  On the rest  spread the Havarti Dill Spread and put bean sprouts (I only had the large size and they needed to be used, I prefer the small sprouts instead.)  Then top them with Kippered Salmon.

It was amazing to have the chowder that warmed my bones and the bruschetta was really magnificent,  my favorite was the mix with the bean sprouts it added a new depth and the flavor was incredible…. 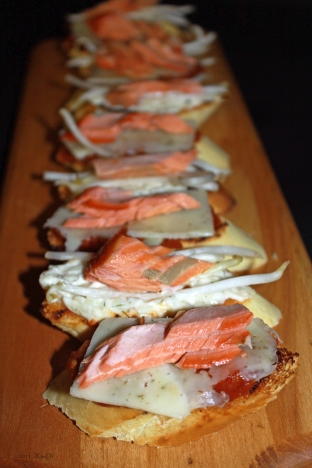